How to Modify GP Forms using GP Modifier and VBA

Microsoft Dynamics GP can be customized in number of ways. In this blog I am going to cover GP Forms customization using Modifier and VBA code.

To modify an existing form, we need to do 2 basic steps.

Step 1 – Modify the GUI of the form, it may involve adding new fields, deleting fields, changing format or layout, etc.

Step 2 – Modify the logic of the form, maybe the way it fetches data or perform actions

Step 1 is achieved by Modifier and Step 2 is implemented using VBA.

What is a GP Modifier?

Modifier is a tool which assists in customizing GP Forms and Windows. Modifier is limited in what it can do when it comes to customization. But when paired with VBA, it can take care of most of the customization needs. Broadly speaking it allows the following customizations:

How to start the Modifier?

There are 2 ways to launch the Modifier 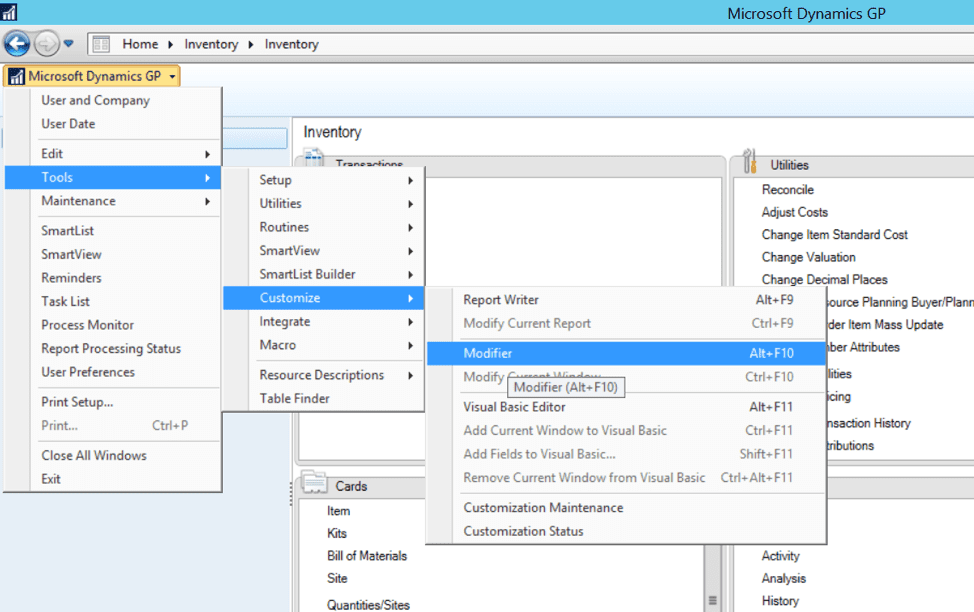 And here is how the modifier looks: 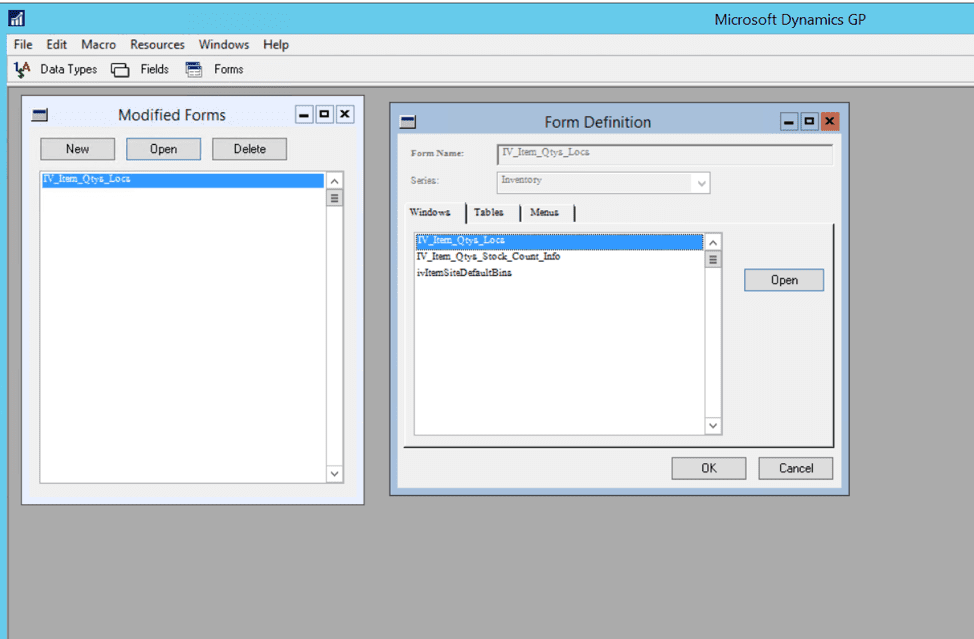 ‘Modified Forms’ show a list of Forms that have been already modified. If you click ‘Open’ then another window opens with Form Definition. A GP Form is a collection of Windows, tables and menus.

If you click ‘new’ then you see a list of forms that you can pick for modifications. There is also an option to Delete modifications. 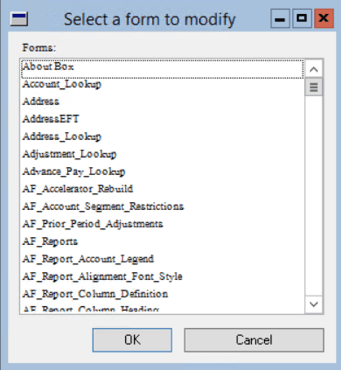 Another way to launch Modifier is from the individual task window.

This option will take you directly to the modifier with the current window opened in Modifier. 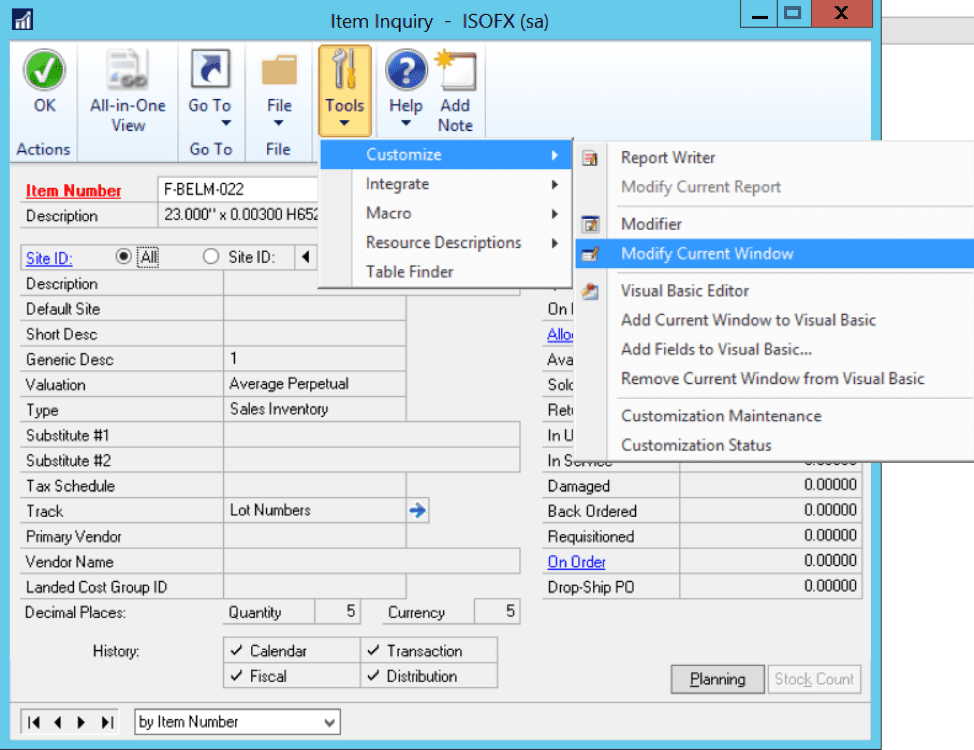 To go back to GP,  File >> Microsoft Dynamics GP 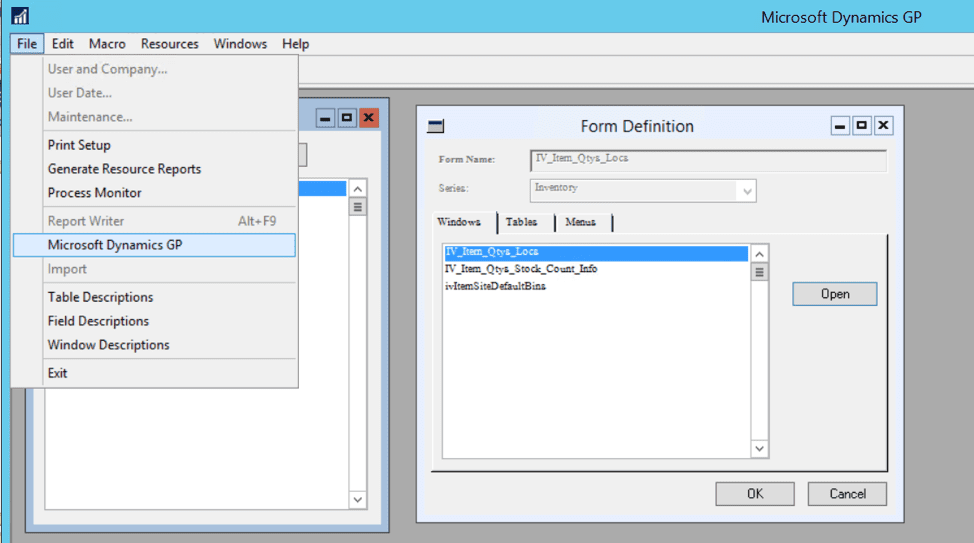 Can’t see the Modifier? Read on.

If the Modifier option is greyed out, then it means you either have to run the installation or you do not have access to the Modifier. You can refer to Microsoft Dynamics GP installation Guide for more information on how to install Modifier.

There is a predefined security task ADMIN_SYSTEM_009 for Microsoft Dynamics GP to control which users will be able to access the Modifier. Assign this security task to an existing role to grant access to the Modifier for users assigned to that role. It is probably a good idea to create a new security role for the Modifier. 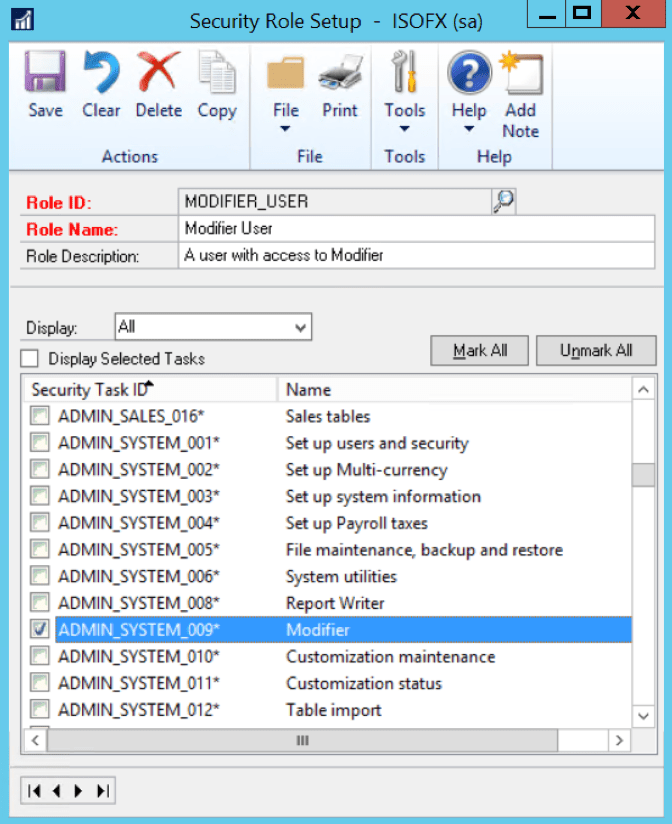 How to Add New Fields to Existing Forms

After some brief introduction to Modifier, let’s use it to add new fields to an existing Form.

As an example, I am going to show how you can add a text box to an Item Inquiry Window.

There is a Toolbox with various option to be dragged and dropped on the Form. Properties windows will show properties of the selected object.

Let’s add a new label and a textbox on the form and call it ‘QA Status.’ Use Static Text tool for the label.

Next drop a tool ‘String’ next to the QAStatus label. 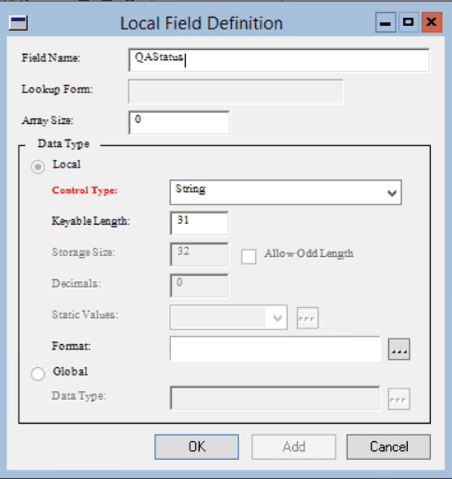 The new field is going to be completely out of whack and not aligned. You can try and adjust the field length, height and position using your mouse pointer, but it is will never be perfect. Instead, Modifier provides a tool to adjust alignment of controls. On the toolbox, switch to ‘Arrange’ tab and there you will find controls to Align and Re-size controls.

Our new field is now ready. Another little caveat is that the changes will not be saved until the form is closed or you go back to GP. User is prompted with a message saying, “do you want to save changes?” 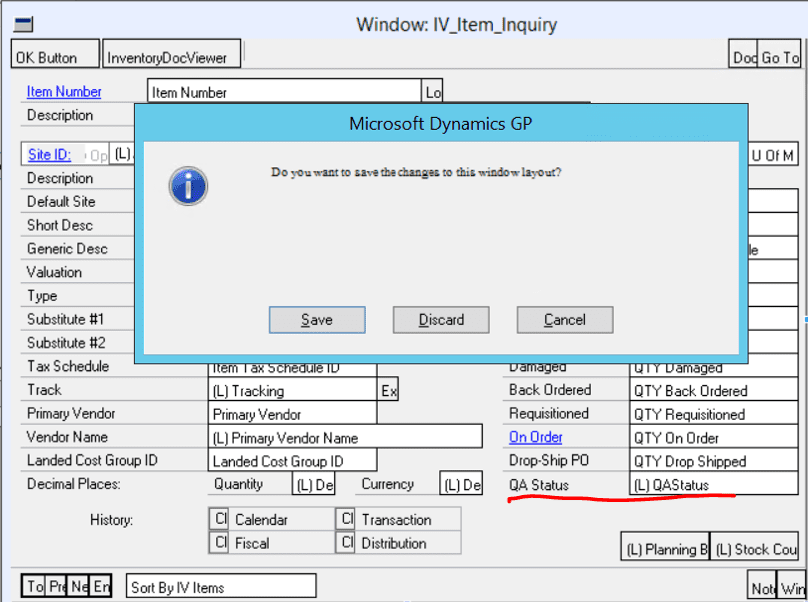 Where Did the New Field Go?

After saving the changes, let’s go and see the new field in the item inquiry window.

Inventory >> Inquiry >> Item, enter an item number. You will see that the new field is still not visible– where did it go? This is because GP is still using the in-built item inquiry form, and you have to let GP know to use the new modified form. To do this, you must use the Alternate/Modified Forms and Reports window in Microsoft Dynamics GP to grant access. To open this window, choose 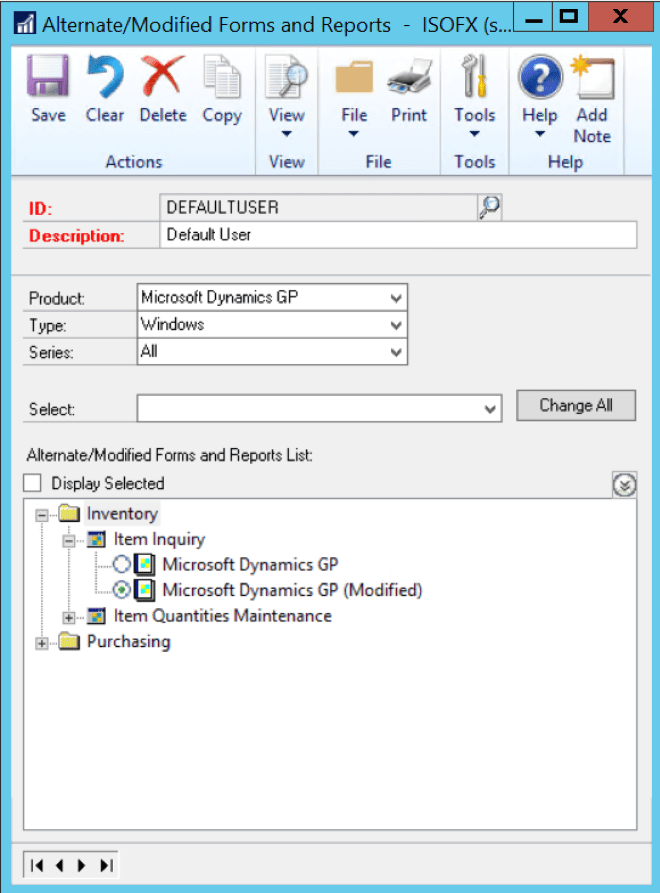 Now when you browse to Item Inquiry window, you will see the new field QA Status. It is still a stationary label with an empty textbox, and we need to put some logic to populate it. This is done using VBA code.

Also note that the Title of the Window has a ‘.’ (dot) in front of it which indicates that it has been modified by the Modifier and that GP is displaying a Modified Form. 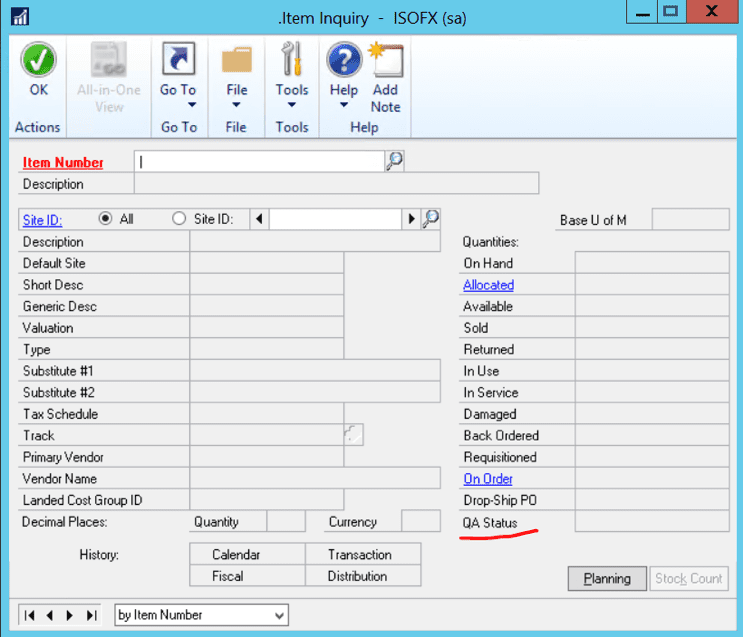 Visual Basic Editor is used for building and maintaining a VBA project. Once you register the Modifier, the Visual Basic Editor becomes accessible though the Tools submenu of the Microsoft Dynamics GP menu. To create or edit VBA code, you must have appropriate user privileges. Typically, this means being part of the Administrators group 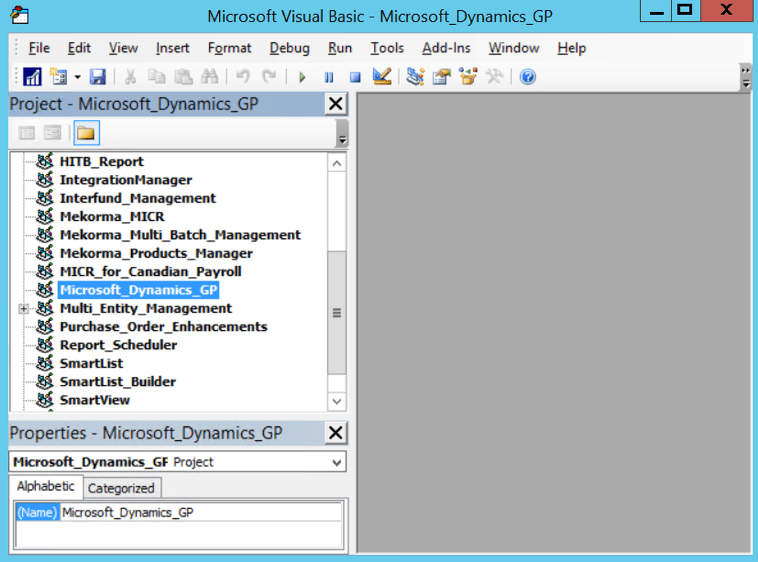 To add custom logic to the new field that we created above, we need to do 3 things

Open Item Inquiry window and browse to Tools -> Customize -> Add Current Window to Visual Basics. Switch to the Visual Basic Editor and display the Project Explorer. It should look similar to the following: 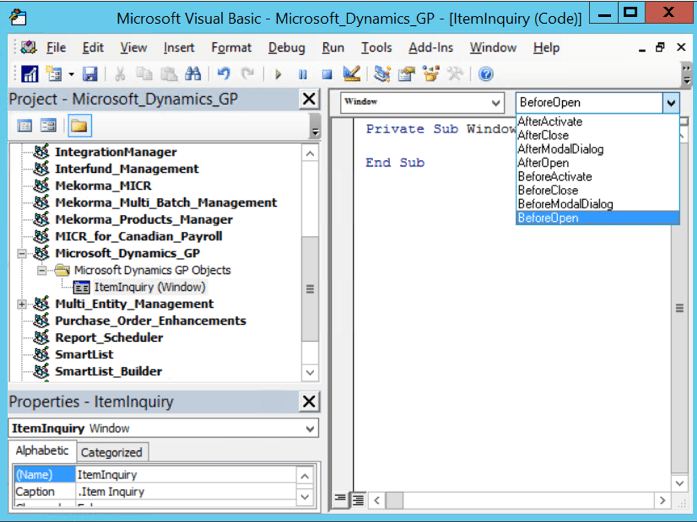 The cursor changes to a special character, simply tap on the fields that you want to make available in VBA. Item Number and QA Status is now available in the VBA code dropdown. 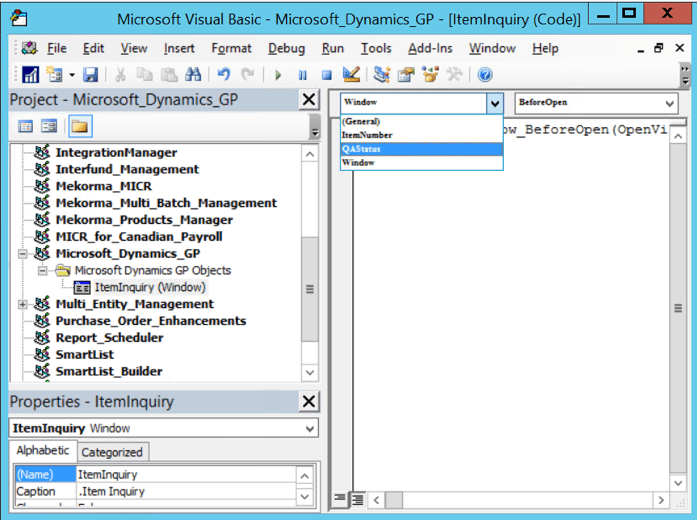 3. Open Visual Basics Editor and code it up 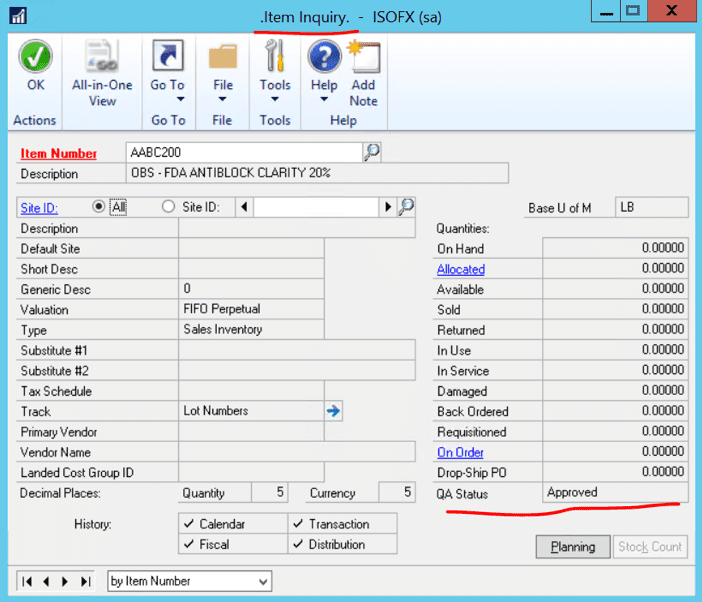 Note that the title of the Item Inquiry window has ‘.’ (dot) in front of it and it ends with a ‘.’(dot). Dot in the front indicates that it is been modified by a Modifier and Dot in the end means that there is VBA code for this Window.

KTL Solutions is here for all of your Microsoft Dynamics GP needs. As a gold-certified partner, we have the knowledge you need to customize Dynamics GP to suit your needs. Don’t let your technology hold your business back.

Get in touch with us today for more information on Microsoft Dynamics GP. One of our Business Consultants will be in touch with you quickly.